A Survivor of the Korean War Battle of Pork Chop Hill 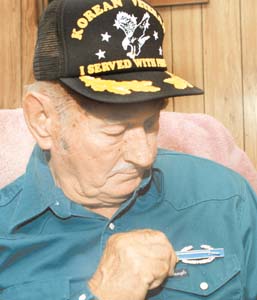 By Riddhi Trivedi The Daily Iberian

LOREAUVILLE - Whitney LeBlanc fought long and hard in the U.S. Army during the Korean War.

His son fought long and hard to get the honor badge LeBlanc earned.

Nearly 50 years after his discharge, LeBlanc, 75, finally has his badge.

LeBlanc's discharge papers said he had been given the Infantry Badge for having fought with the 32nd Infantry division in the Korean War. He never received it.

"I went to the authorities and wrote letters and applications," said his son, Roger. "Finally two weeks ago, I went to Lafayette to get my father's badge."

Roger LeBlanc said it took almost a year to get the badge. He started the process of writing to the Army after he came across his father's discharge papers and asked his dad about the badge.

Whitney LeBlanc was drafted. He was young. He was hard-working, but had a comfortable life working on his family's sugar cane farm in Olivier.

For his time in the trenches, fighting some of the bloodiest battles of the Korean War, the recognition came late.

With the badge, came memories. Memories of being shipped out to war in 1952 after 30 days of basic training. Memories of arriving at the final railway station packed in railcars "like sardines." Memories of going into battle in cold, rain, gloom and mist.

"The North Koreans had the hill and our trenches were at the bottom," Whitney LeBlanc said. "When we got there a flare was lit. In front of us was a minefield with a dozen armed men, all of them either dead or wounded."

Accompanied by three other companies of soldiers, his division made three assaults on the hill and retreated, losing men each time, LeBlanc said, until the hill was finally captured.

Then, they turned it over to the South Korean troops and advanced to the next one, Pork Chop Hill.

"It was pork chop all right," LeBlanc said. "That's where you got chopped up."

At 25, he was the oldest in his company. Some of the younger soldiers, 18 or younger, were terrified when they saw the death and destruction, he said.

"They would cower in the trenches and cry," LeBlanc said. "They wanted their homes and their mothers. We told them, 'Too late now, son. Either kill or you will be killed.'"

The battle in which the hill was finally taken started with four companies of 250 soldiers each, he said.

"When the battle ended, 12 of us walked off the hill alive," LeBlanc said.

He became visibly shaken by the memory.

"The others were either dead or too badly wounded," he said.

Those who survived spent the night carrying the dead and wounded off the hill in pouring rain, mist and smoke. When the smoke and mist cleared, he said, the rainwater running down the hill was red.

The most vivid memory he carried back from the war - where he lost so many close and dear friends - was that of seeing the dead and the wounded everywhere, he said.

"Sometimes, sitting there in the trenches with bullets whizzing around and people getting killed I would wonder what this was all about," Whitney said. "Who and what were we fighting the war for. It wasn't for our country or our independence."

He calls Korea the forgotten war. No one ever talks about it when they talk about foreign wars or foreign war veterans, he said.

During the battle of Pork Chop Hill, he got separated from his company and fought for two weeks with the 31st division. His family was notified LeBlanc was Missing In Action.

In 1954, after 15 months of fighting, he was finally discharged from the army.

Because his family had been told he was MIA, Whitney said, there was no one to receive him and take him home when his bus arrived.

"The same taxi driver who had driven me to the bus stop at the beginning of the war took me back home," he said.

Note: The Wikipedia Article on Pork Chop Hill has been edited to add that Whitney Adam LeBlanc is a survivor - see http://en.wikipedia.org/wiki/Battle_of_Pork_Chop_Hill